Underground construction projects present unique challenges. Some of the largest and longest tunnels being constructed require the use of tunnel boring machines, known in the tunneling industry as TBMs.

TBMs are elaborate machines, focused around a massive rotating cutterhead that is equivalent in size to the tunnel diameter. The entire cross-sectional diameter of the tunnel is excavated simultaneously as hydraulic pistons slowly thrust the TBM forward at a pace measured in millimeters per minute.

TBMs are used to construct tunnels through nearly any geology with minimal surface disruption. TBMs excavate tunnels, largely unnoticed, under buildings, cities, mountains and rivers, and even under lakes, bays and oceans. The two most common uses of tunnels constructed by TBMs are transportation (subway, train and highway tunnels) and water management (fresh water supply, storm water management and sewage conveyance). Tunnels constructed to reduce combined sewage overflows (CSOs) keep innumerable gallons of sewage out of North American waterways and provide a layer of flood protection to many major cities.

MAPEI UTT is a leader in supplying essential chemicals to TBMs in North America and around the world, with the products and expertise to keep TBMs running in an efficient, safe and environmentally conscious manner. Options range from a Mapequick CBS System (used for two-component annular grouting when combined with cement and water), to the Polyfoamer line (used for soil conditioning), to the Mapeblox and Mapeoil lines of greases and oils. MAPEI UTT also supplies ancillary products used in tunneling, such as bentonite and polymers for excavation slurry, cementitious and chemical grouts for injection, shotcrete products, waterproofing membrane systems, and products for concrete repair.

MAPEI UTT continues to innovate and lead the marketplace with new environmentally friendly solutions for TBMs. Soil conditioning is one area where MAPEI UTT products can make an immediate positive environmental impact. Soil conditioning is a technology used by earth pressure balance (EPB) TBMs. EPB TBMs are commonly used to excavate tunnels in soft ground like clays and sands. In order to maintain stability of the excavation face against collapse and to prevent surface and groundwater disruption, the area where the TBM contacts the soil, called the “face,” is pressurized. The pressure of the excavation chamber is equal to the pressure exerted by the soil to be excavated – hence the term “earth pressure balance.” Typical operating pressures range from 1 to 5 bar. Special additives (surfactants and polymers) known as soil conditioners are combined with water and injected as foam into the soil to form a paste called “muck” (similar in consistency to toothpaste) that easily passes out of the excavation chamber, onto a conveyer belt and ultimately out of the tunnel.

The question that remains is, now what? The soil conditioner that remains in the soil can pose problems in the downstream handling of excavated material. The excavated material must be disposed of, often as landfill, but remaining chemicals in the muck pose environmental hazards. Handling and final placement issues can vary widely in cost and can contribute to the overall project’s level of success.

In response to this problem, MAPEI UTT collaborated with MAPEI R&D to develop a new, more environmentally friendly soil conditioner: Polyfoamer Eco 100 Plus. The technical performance of Polyfoamer Eco 100 Plus is comparable to that of a traditional soil conditioner. It produces a stable foam with a long half-life, is compatible with all types of soil, reduces clogging and provides necessary lubrication to the cutterhead.

Polyfoamer Eco 100 Plus is classified as posing the lowest risk to water per the German Water Hazard Class (WGK). To obtain this classification, a series of validation tests was conducted at the Hygiene-Institut des Ruhrgebiets in Gelsenkirchen, Germany. These studies measured the acute toxicity to various organisms. When compared to traditional soil conditioners, Polyfoamer Eco 100 Plus required a concentration 12 times higher to trigger an LC50 (lethal concentration to 50% of a population) event in Daphnia Magna water fleas and a concentration 15 times higher for an LC50 event in Danio Rerio zebrafish.

A more pragmatic example of the benefits of Polyfoamer Eco 100 Plus was recently demonstrated at the Riachuelo project in Buenos Aires, Argentina. The project consisted of 12 km of tunnel in sandy soil under water. The EPB TBM was operated at a pressure of 4.5 bar during the project, with an advance at a rate of 600 to 650 meters per month. Muck treated with Polyfoamer Eco 100 Plus was used as fill in an area near the jobsite. Just months after the final surface deposition, the area was vegetated and sustaining plant life.

While eco-friendly soil conditioners are required on many jobsites around the world, North America lags behind, with the use of traditional soil conditioners still being commonplace here. But the tide is changing, and the tunneling industry has begun to realize the numerous benefits of using more environmentally friendly products, particularly for soil conditioning. Not only are products like Polyfoamer Eco 100 Plus better for the environment, they also improve worker safety and reduce muck handling and disposal costs.

MAPEI UTT looks forward to continuing to innovate by producing better and more environmentally conscious products for TBMs. Polyfoamer Eco 100 Plus is just one of the many innovative products in the MAPEI UTT offering of TBM products. When MAPEI UTT supplies a TBM, our goal is to reduce the overall cost, duration and environmental impact of the project. MAPEI UTT welcomes the opportunity to partner with owners, engineers and contractors to develop a plan for safe, successful and sustainable completion of any TBM project. 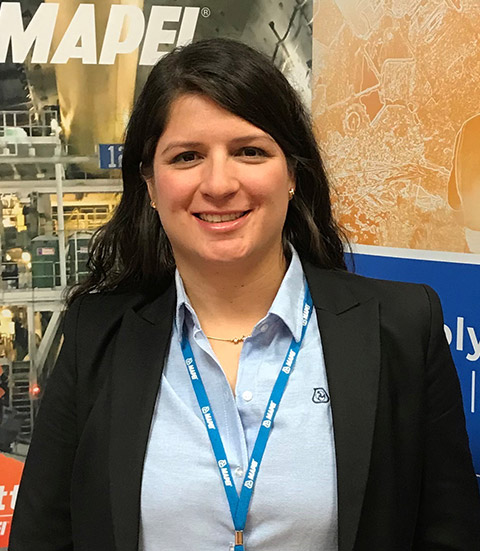 About the author:
Dr. Cristina Oñate